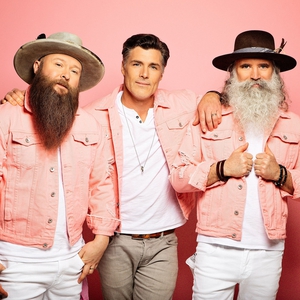 THE WASHBOARD UNION, Juno Award Winning, Three-time CCMA Group of the Year and five-time CCMA Roots Artist/ Album of the Year are among Canada’s preeminent country bands. Their

THE WASHBOARD UNION, Juno Award Winning, Three-time CCMA Group of the Year and five-time CCMA Roots Artist/ Album of the Year are among Canada’s preeminent country bands. Their songwriting and storytelling that has resonated with audiences from North America to Europe. THE WASHBOARD UNION keep the good times rolling with an irresistible blend of roof-raising anthems and poignant ballads, coupled with their impeccable three-part harmony and top-notch musicianship. This is a band that cares deeply about their fans, and anyone who has seen them live knows The Washboard Union engage with their audience at every opportunity.

On their new album Everbound, The Washboard Union secure their status as one of Canada’s preeminent country bands with 10 songs that celebrate the simple joy of life. The follow-up to their 2018 album What We’re Made Of—which earned the trio their first JUNO Award for Breakthrough Group Of The Year—Everbound keeps the good times rolling with an irresistible blend of roof-raising anthems and poignant ballads.

The impeccable three-part harmony and top-notch musicianship once again displayed by Aaron Grain, Chris Duncombe and David Roberts is only one aspect of The Washboard Union’s appeal. With about 30 songs in the running to make Everbound’s final cut, the group was determined to offer only their best material, aided by the keen ears of Nashville producers Gordie Sampson, Thomas “Tawgs” Salter and producer Karen Kosowski, who also co-wrote the album’s uplifting first single “Country Thunder.” Accompanied by a video starring puppet versions of Aaron, Chris and David, its quick rise up Billboard’s Canada Country chart made the song their highest charting single to date.

It’s all part of the unique relationship The Washboard Union shares with their audience that has evolved from playing the western Canadian bar circuit in the early 2010s to performing in front of over 200,000 people in North America and Europe last year alone. “We’re pretty positive people by nature,” Chris says. “We often hear that our music gives people hope, and that’s probably the thing that unites the songs on this album. There are rallying cries, but there’s also a lot of personal stuff too. If we’re able to put into words things that people sometimes aren’t able to say, then that’s a huge accomplishment.”

In alluding to the second single “Dock Rock” and songs such as “My Weekend Amen” and “Shut ‘Er Down,” Aaron adds, “As the album came together, it started to take on a real summer-y vibe, which we hadn’t intended but was really cool. At the same time, there’s the first real tear-jerker we’ve ever done, ‘More Memories Than Wishes,’ and a couple mid-tempo tunes that were new territory for us. We’re growing as writers, and we’re really thankful for our fans’ support as that’s happened. We’ve always felt like square pegs in a round hole in terms of our overall sound.”

That sense of gratitude largely inspired the album’s unusual title, as David explains. “The songs were giving us so much energy, and a sense of creative freedom that I don’t think we’d ever felt before. We wanted the album title to reflect that, and as the ideas popped up, we kept returning to this wordEverbound. It’s a made-up word that has real life meaning. To us, Everbound means never letting life set limits on what you can imagine and never losing that sense of wonder we are all born with. We hope people come up with their own definition, just as they can interpret the songs on the album however they want to.”

By now, fans are familiar with the Washboard Union’s origin story, but it bears repeating. Grain and Duncombe first met at age 15 in Kelowna B.C. when Chris’s father began dating Aaron’s mother. The pair immediately forged a close friendship and a few years later decided to move to Vancouver to establish a music career. There, they soon encountered Roberts who at the time happened to be living in a 1920’s Tudor mansion overlooking the beach. While Chris and Aaron had already developed their harmonizing skills, the addition of David’s voice opened up even more artistic possibilities. Relying largely on acoustic instrumentation, including Roberts’s historic washboard that gave the band its name, 2012 saw them release their independent self-titled debut, co-produced by Garth Richardson and the legendary Bob Ezrin.

Three years later, The Washboard Union signed to Warner Music Canada and the hits, along with the awards and accolades began flowing. It’s an impressive list of awards that attests to the band’s dedication and talent. They are 7-time CCMA Award winners which includes being the 2-year-reigning Group of the Year and winners of the Juno Award for Breakthrough Group of the Year, bringing their career music award total to an awe-inspiring 28 wins. It’s a story not just about how three guys managed to make great music together and become one of Canada’s most successful and beloved country bands, but that they’ve done it through the genuine friendship they share. Chris says, “We are incredibly close. We always joke that if everything to do with the band ended tomorrow, the first thing we’d do is call each other up and say, ‘Wanna hang out today?’”

Aaron concurs, “Our friendship is definitely based on making music together, but it goes way beyond that. We talk to each other every day, whether we’re working or not, and our lives are so entwined that I can’t imagine that ever changing.”

It is indeed rare to find a band led equally by three distinct personalities. It’s not something The Washboard Union has gone out of its way to promote—their bond has naturally sent the message that all are welcome. As David says, “At one point, some of our female fans started telling us after shows that their husband or boyfriend wasn’t a country music fan, but after seeing us he became one. That’s one of the most satisfying things to hear, because it’s totally beyond our control.”

There are sure to be many more converts in the wake of Everbound as The Washboard Union continue to prove that creativity is not limited by the use of traditional instruments. Although they will still be called country, The Washboard Union will always sound exactly like who they are.