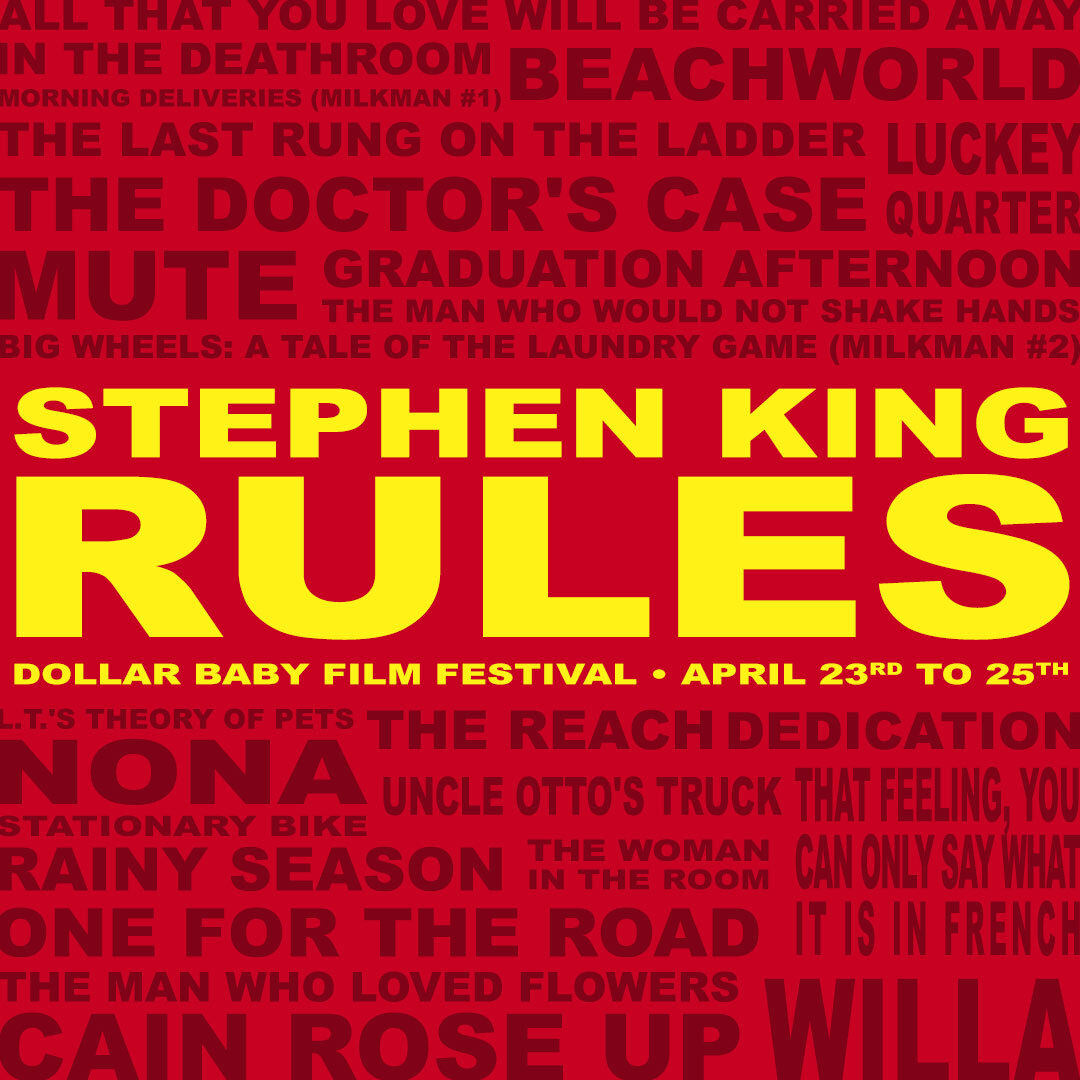 This April 23-25, a selection of Stephen King movies will be available to watch online for free. Hosted by Canadian film production company Barker Street Cinema, the virtual

This April 23-25, a selection of Stephen King movies will be available to watch online for free. Hosted by Canadian film production company Barker Street Cinema, the virtual festival, called STEPHEN KING RULES, will screen 25 submissions by filmmakers from all over the world, many of which have never been seen by a global audience before.

Since 1977, the Master of Horror – Stephen King – has allowed emerging filmmakers to adapt his previously unproduced short stories into films that may help launch their careers through what is called the Dollar Baby Deal. Barker Street’s STEPHEN KING RULES Dollar Baby Film Festival will showcase an exciting line-up of these independent movies, including interviews and panel discussions with the filmmakers themselves.

Barker Street Cinema partners James Douglas and Norm Coyne will lead the festival three years after making their own Dollar Baby adaptation of King’s Sherlock Holmes mystery THE DOCTOR’S CASE, which will also screen at the festival. Douglas points to the film as the launch pad for his film career and the remarkable effect the program has had for so many.

“I can personally attest to the impact the Dollar Baby initiative has had on my career as a filmmaker,” Douglas said. “Being able to share these stories with the world in this manner is unbelievably profound.”

THE DOCTOR’S CASE has won 15 awards to date at more than 40 international festivals. The film stars Denise Crosby (Star Trek: The Next Generation, Pet Sematary), Michael Coleman (ABC’s Once Upon a Time) and William B. Davis (The X-Files’ Cigarette Smoking Man). During COVID isolation, Douglas and Coyne came up with the idea to offer some of their previously unreleased content for free online, a sentiment that they soon found was echoed by many other filmmakers. The Dollar Baby arrangement with Stephen King restricts releasing the films outside of film festivals and the films are rarely permitted to screen online. The two decided to “Hail Mary” the Master of Horror and, as luck would have it, King gave the festival his blessing.

“As storytellers, we were looking for ways to do our part to help provide an escape for people that wouldn’t cost them anything,” said Coyne. “The fact that James got the approval for an entire festival of stories from Stephen King himself is a total mind bender.”

The STEPHEN KING RULES Dollar Baby film festival is scheduled to take place April 23-35, 2021 and will be hosted on Barker Street Cinema’s private Vimeo channel. The three-day event will be co-hosted by author and Stephen King aficionado Anthony Northrup, who penned STEPHEN KING DOLLAR BABY: THE BOOK, media and design personality Leah Coghlan, and will feature special appearances by the likes of longtime Stephen King collaborator Bev Vincent (FLIGHT OR FRIGHT, THE DARK TOWER COMPANION) and others.

Viewers can interact with the festival all weekend during their tweet along party, by following on Twitter at https://twitter.com/StephenKingRlz with the hashtag #stephenkingrules

Festival will be streamed live on
Youtube at http://bit.ly/BarkerStreetCinemaYoutubechannel &
Vimeo at https://vimeo.com/534281778